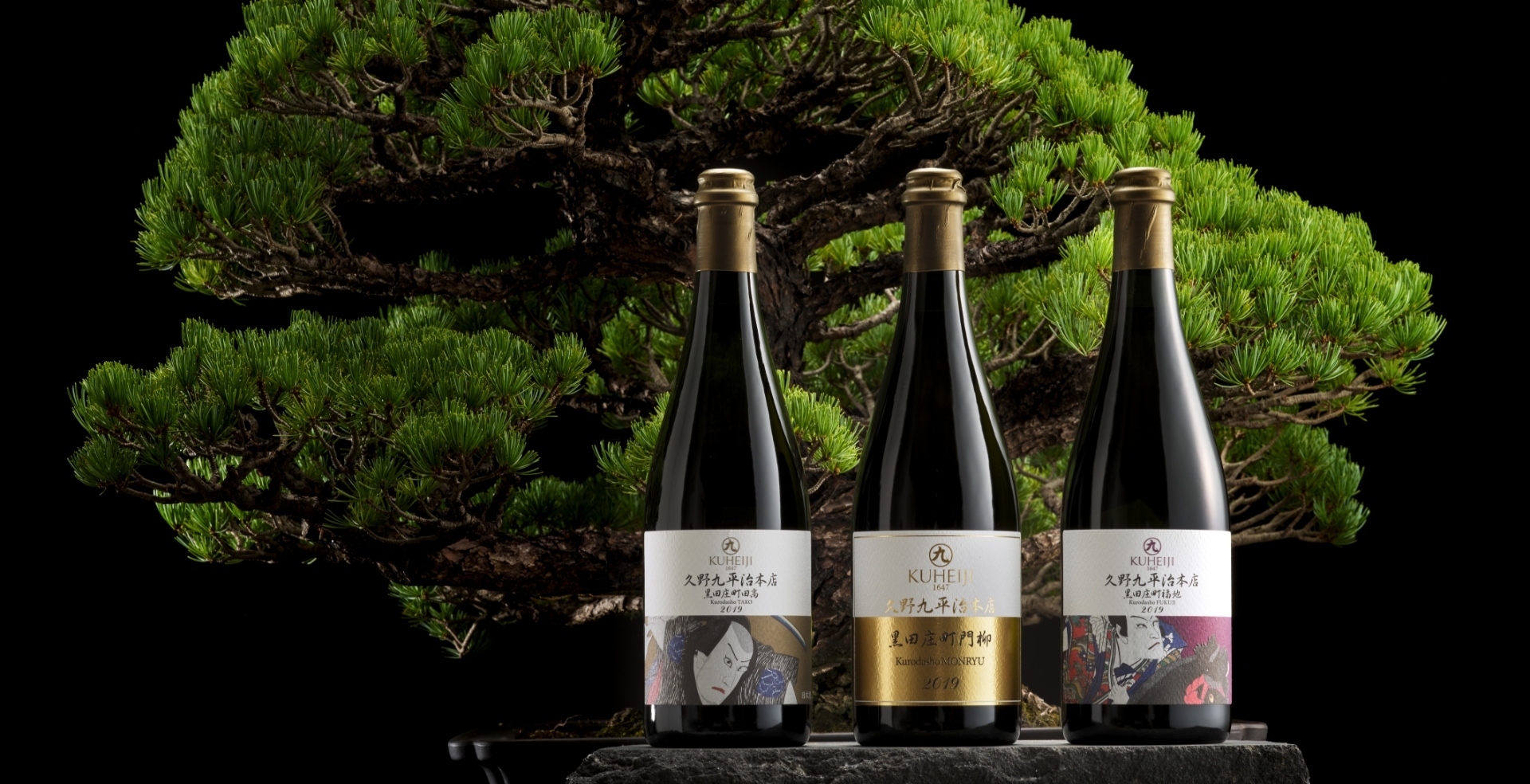 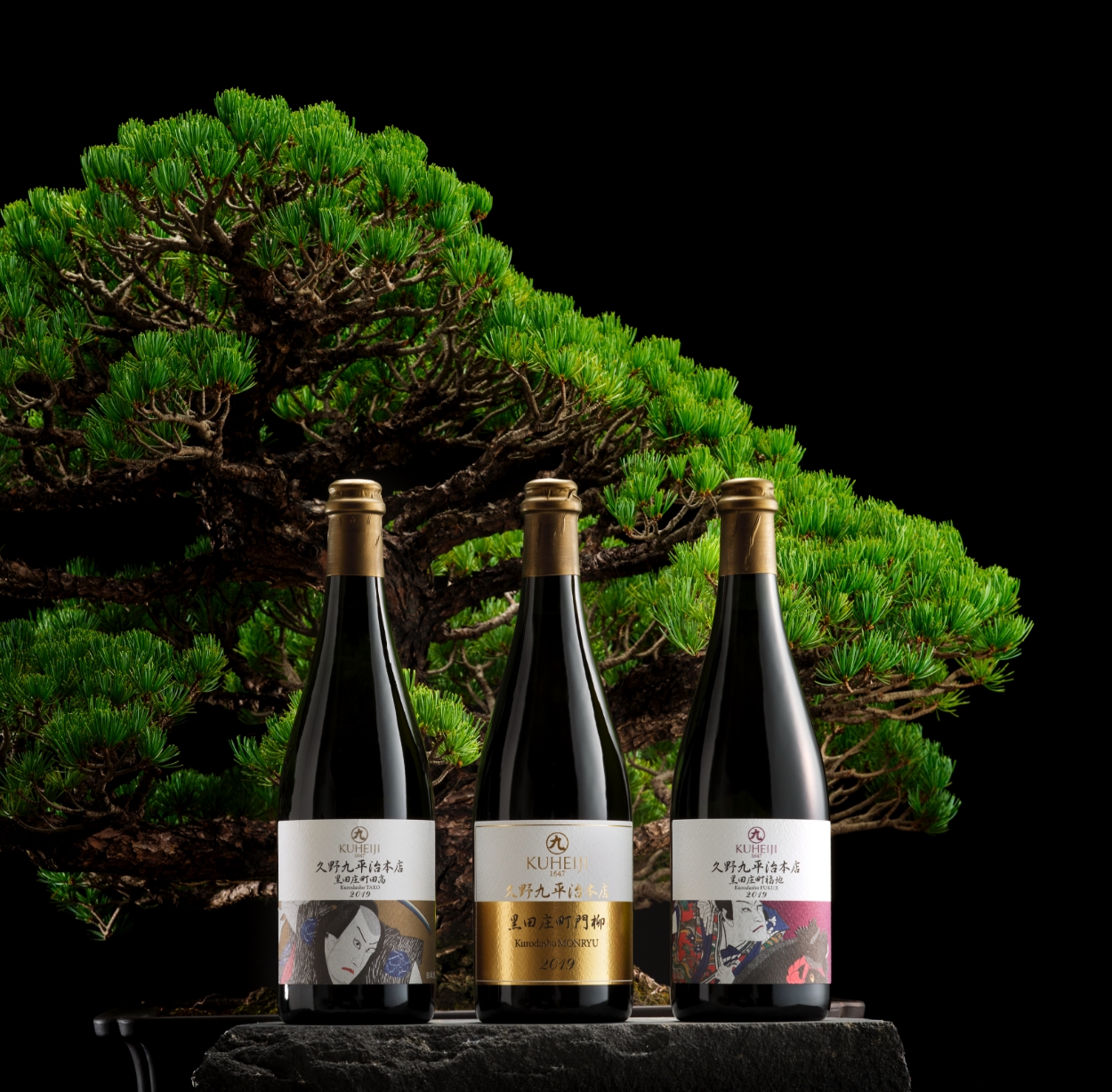 An invitation to
“Terroir”

How are paddy fields different among the areas of Monryu, Tako, and Fukuji?

Going beyond the boundaries of brewing, we stepped our feet into the field of agriculture, checking out the soil of paddy fields for the first time in 2010.
Things learned only through actual engagements.
The experience taught us the facts that each paddy field has different soil characteristics, the climate changes every year, and above all, the sunshine is so precious.
Every year, a paddy field takes a unique path; no two paths are the same.
Enjoy the straightforward terroir expressed in our sake.

The three areas of Kurodasho
are the precious
sanctuaries of ours 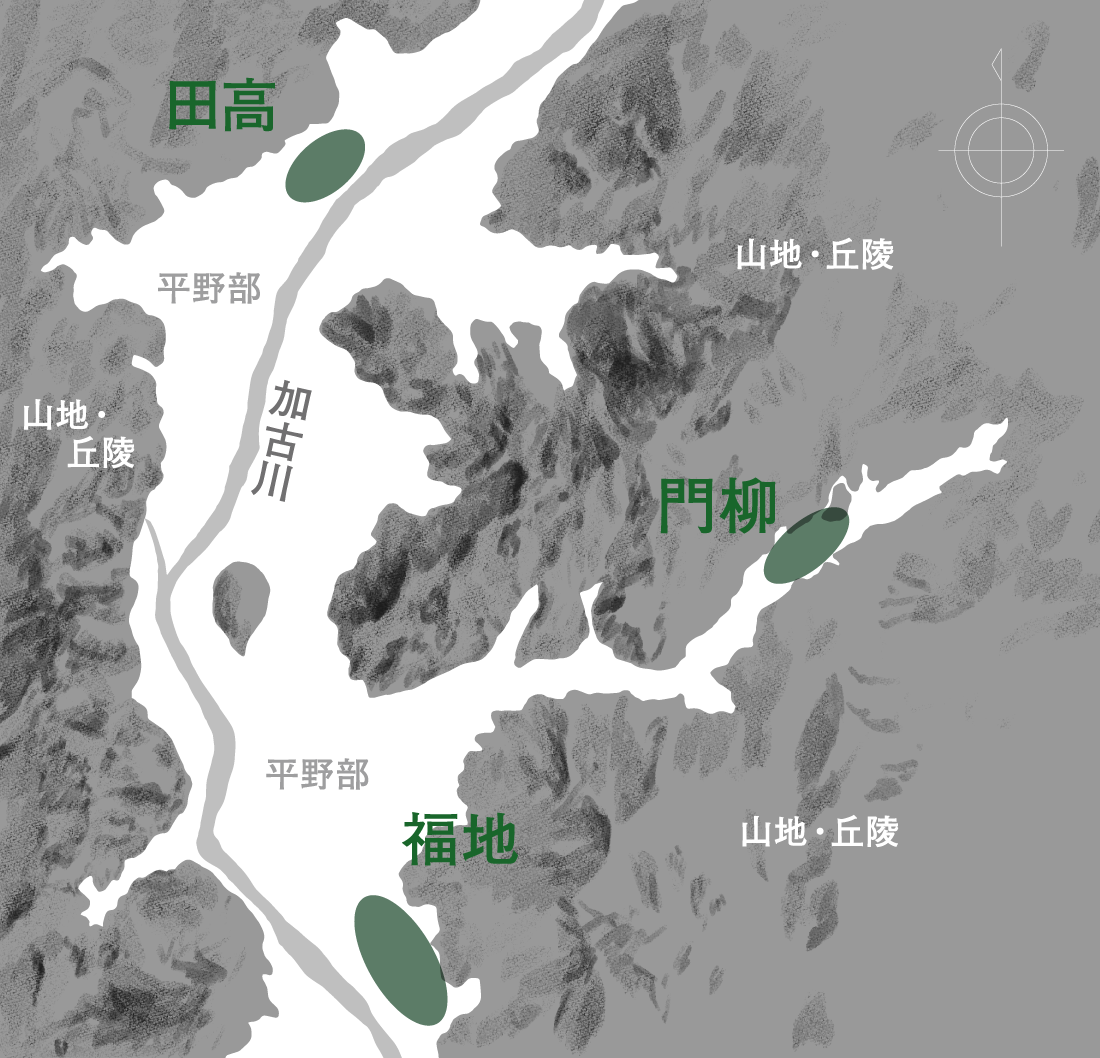 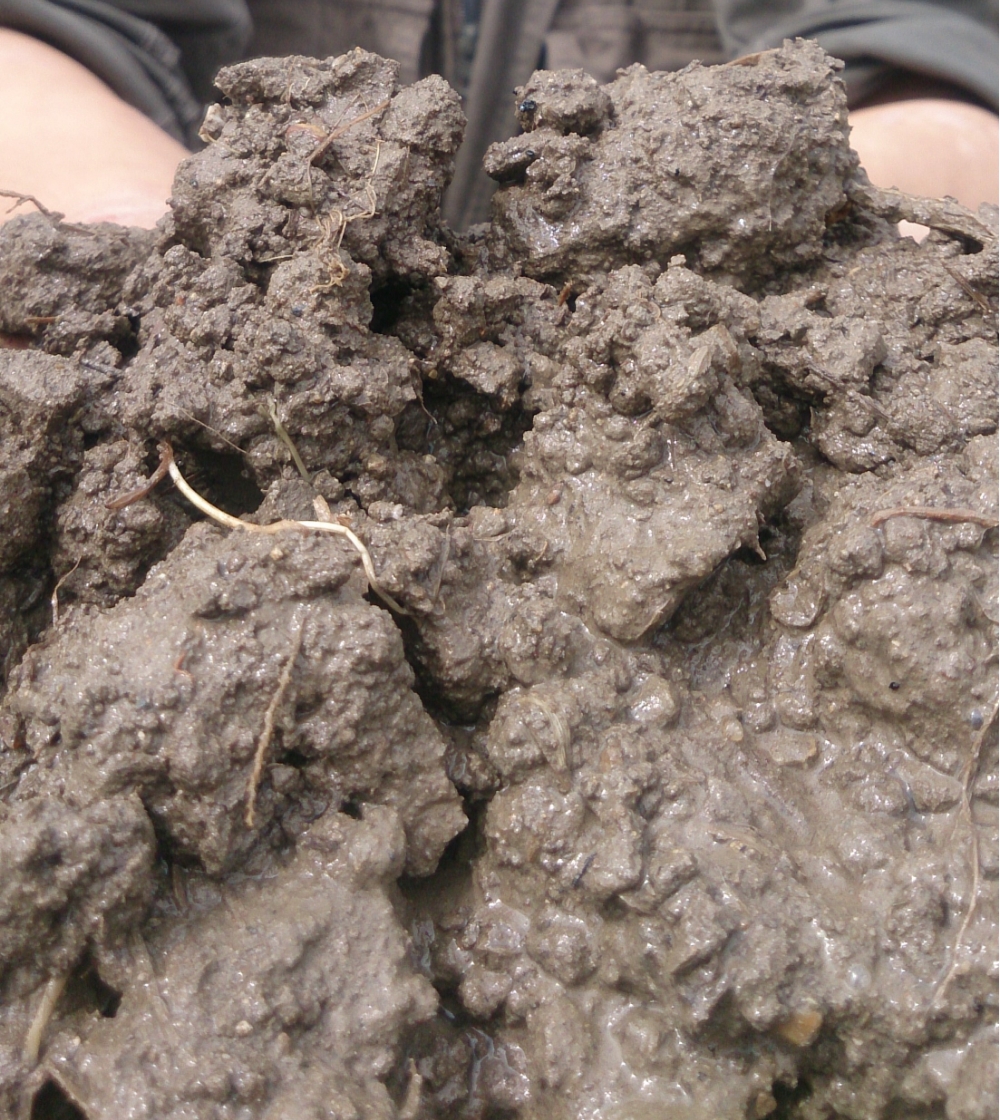 The soil was formed during the Quaternary period of the Cenozoic era (about 2.6 million years ago), and its parent materials are fluvial sediments of sand gravel, sand and silt, and colluvial sediments of sandstone and gravel. The blackish surface layer contains a lot of montmorillonite clay. The bottom layers contain unweathered gravel all over.
The hilly land was formed when Mt. Monryu was raised, and it has been developed into rice paddies. The area gets a lot of sunlight because it is open to the east and west. The high altitude creates a nice temperature gap between day and night, making it an ideal climate for growing rice.
Typically, the sensible temperature in the Monryu area is about 2-3 degrees C lower than that of Tako and Fukuji.

The cold water from the Monryu River running through the mountain (not from the Kako River) is irrigated to the rice paddies, keeping the water temperature low, preventing rice plants from going wilt from heat during summer.
Because the soil is composed mostly of sand and stone from the mountains, water and fertilizer drains easily, making rice plants tougher and stronger. These elements altogether, in addition to the ideal climate, create the intricate and elegant flavor. 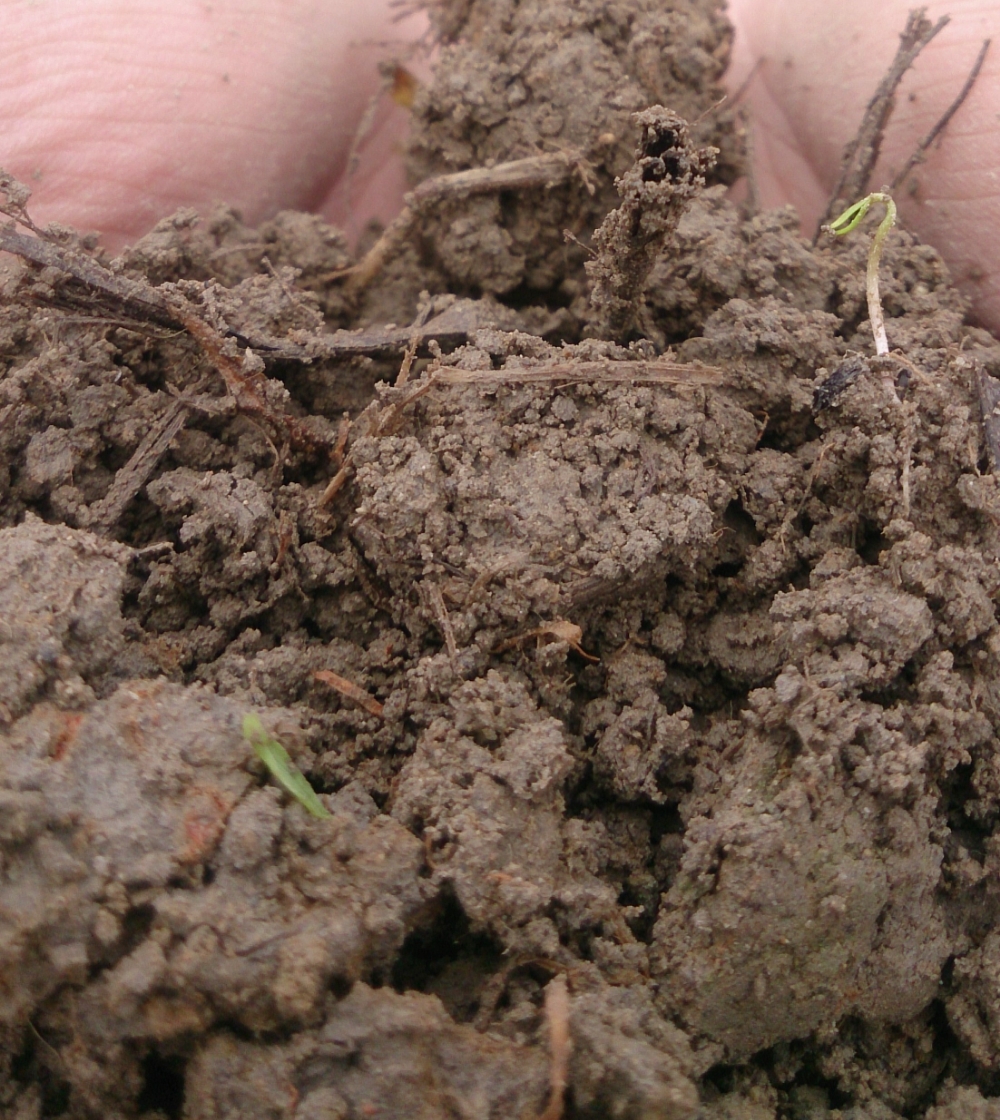 The soil was formed during the Cretaceous period of the Mesozoic era (about 145 million years ago), and its parent materials are fluvial sediments of gravel, sand, and silt. Beneath the brown surface layer with a lot of montmorillonite clay are hard plow sole layers. Bottom layers have good drainage, with brownish color overall.
Situated at a low altitude, the vast, flat and fertile land of Tako gets all sunshine, with no obstruction. It also has mountains in the northwest keep out the afternoon sun, creating the night-and-day temperature difference which is crucial to heathy growth of rice.
It is said that the area was given the name of “Tako” or “田高”: “田” standing for “rice paddies,” “高” for “high” because the rice produced there had been known to be highly valuable.

The soil was formed when the Kako River was flooded. Its clay and sand are kept in good balance, which makes rice highly nutritious. As a result, sake made from the rice typically has a powerful and concentrated flavor. 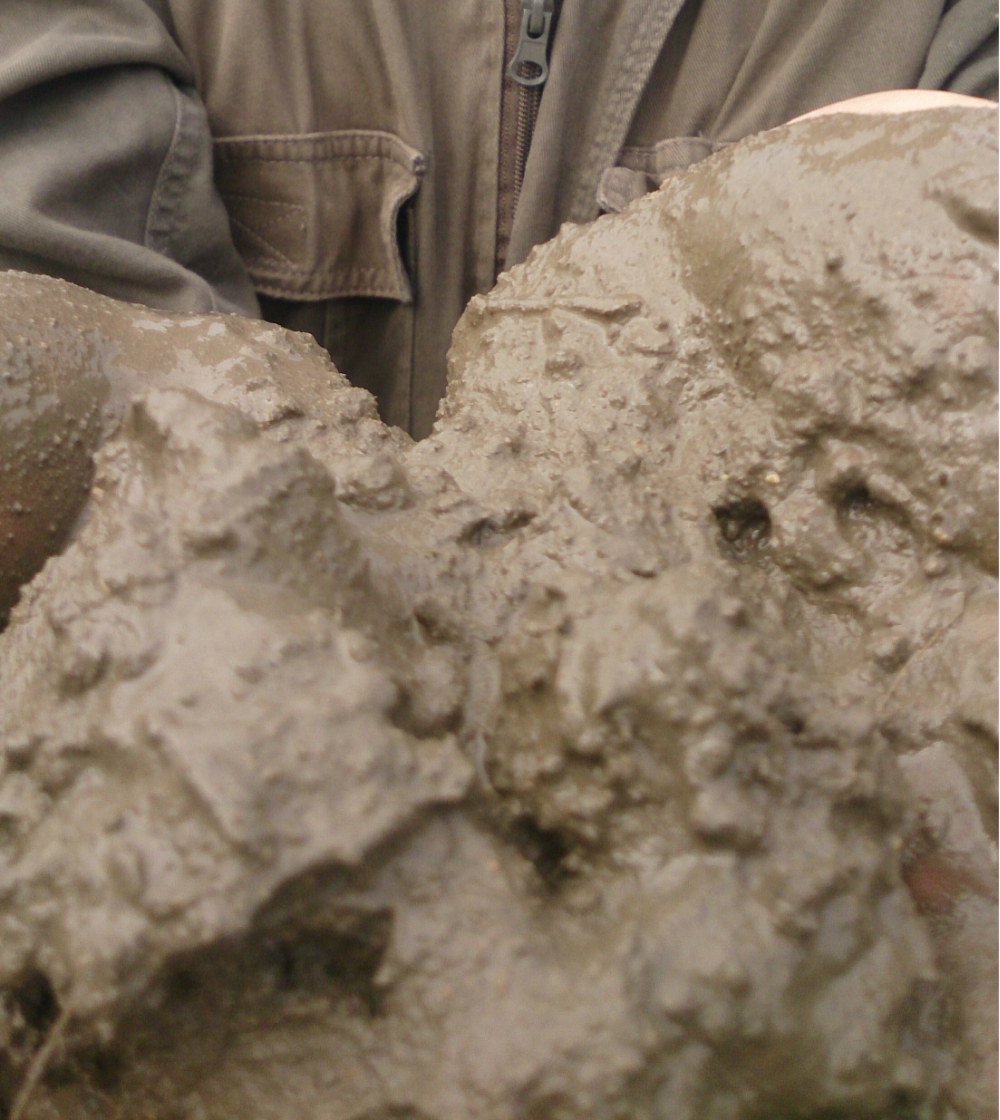 Similar to the Tako area, the soil in the Fukuji area was formed during the Cretaceous period of the Mesozoic era (about 145 million years ago), and its parent materials are colluvial sediments of sandstone, mudstone and gravel. All layers from the top to bottom are argillaceous with almost no gravel.
The land of the Fukuji area was formed as a result of disruption of the mountains in its east and the accumulation of the soil. Therefore, even though the Fukuji area is located on the left bank of the Kako River, it does not have much influence from the river.
With mountains in its east and being open in its west, it has a warm climate even during night.

The soil in this area is typically argillaceous, fertile and holds minerals well. Softness and well-roundedness are the characteristics of sake made from the rice.
Also, with less sunshine compared to the Tako area, rice grown in this area tend to be more affected by high temperatures and water conditions, the terroir tends to be reflected in the differences in the sake’s nuances depending on the vintage. 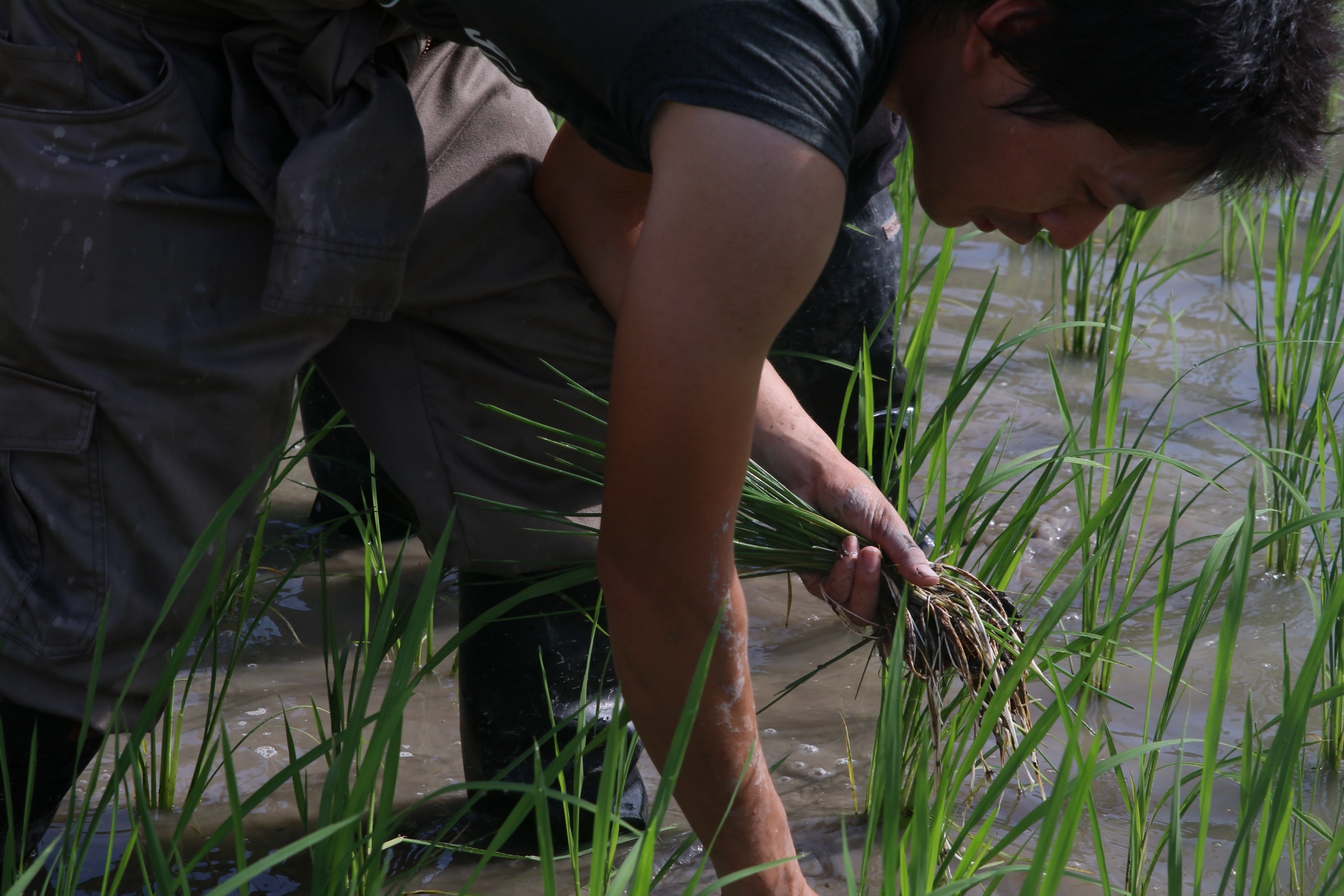 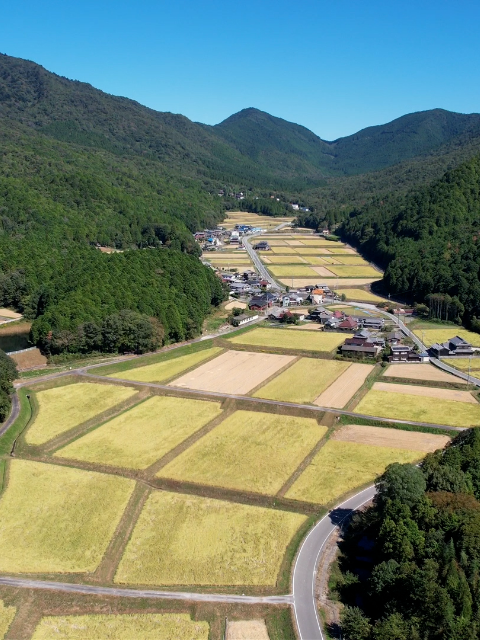 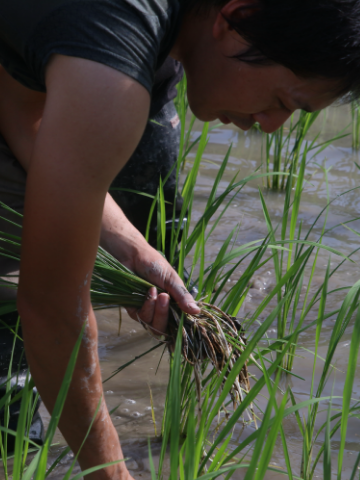 The botanical-colored sake has soft aroma of white peach, pear and May lily. Swirling the glass lifts musky aroma that reminds you of the terroir.
Then joins the scent of cream cheese, adding complexity and elegance.
Fresh acidity, combined with the umami of rice and enjoyable bitterness of mineral, you can enjoy its wonderful medium-to-full-body flavor with velvety texture.
long-lasting aftertaste reminds you of the terroir.
There is also something to it that makes you nostalgic. 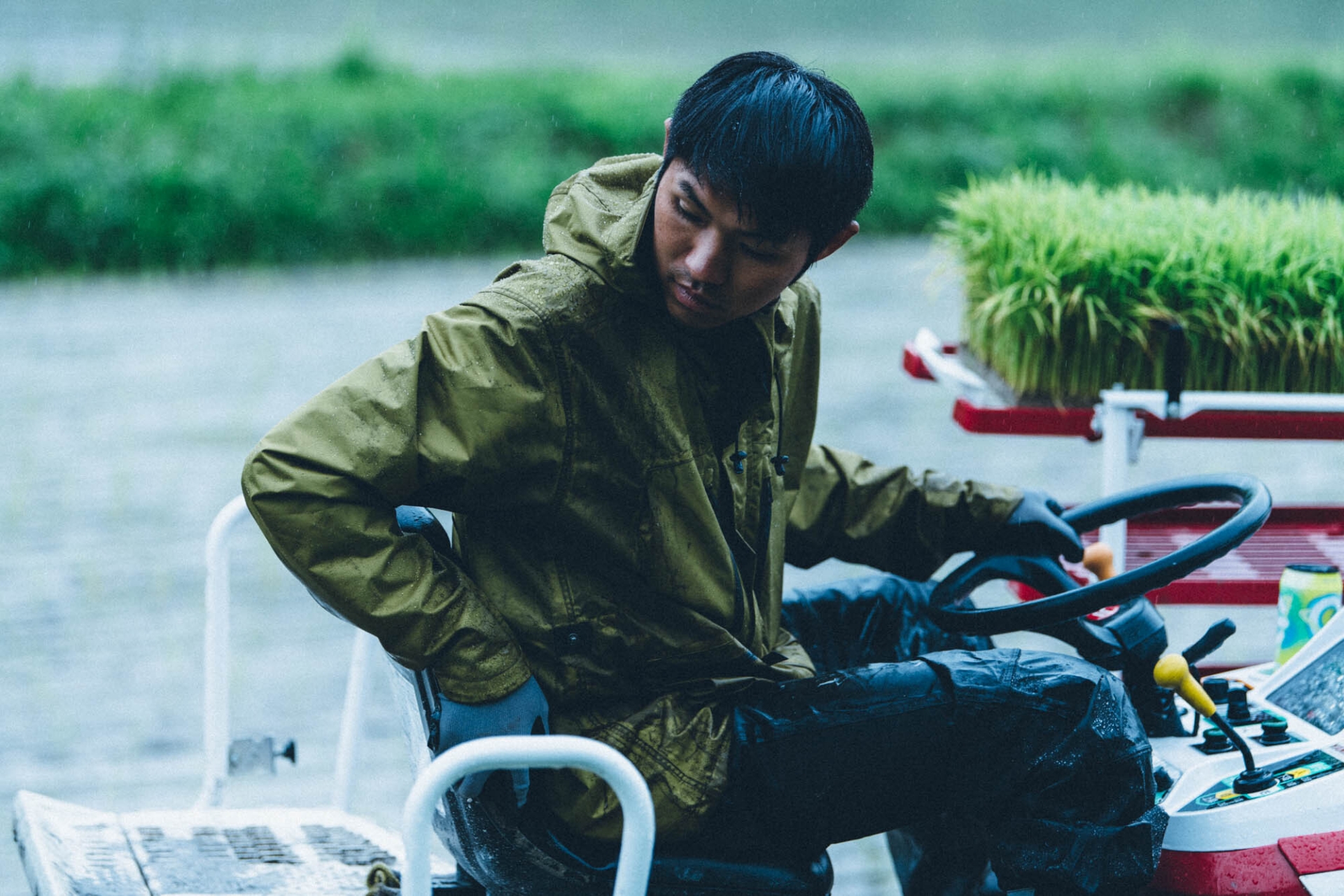 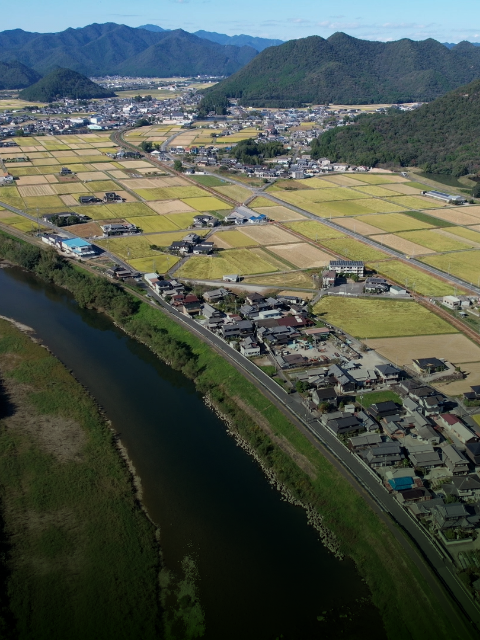 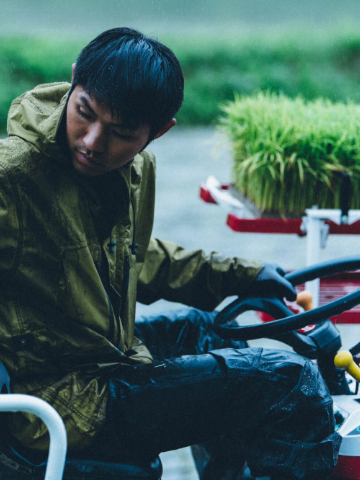 The subtle jade colored sake has very refreshing aroma of fresh citrus, green apples, combined with herbs such as dill and aneth.
Mineral scent derived from rice comes up when swirling the glass.
Just like the aroma, the flavor is also very crisp and fresh.
The sake is known for its flavor with bright and yet elegant acidity, which keeps in good balance with umami derived from rice.
The refreshing acidity tightens the taste towards the aftertaste and gives a slender impression. 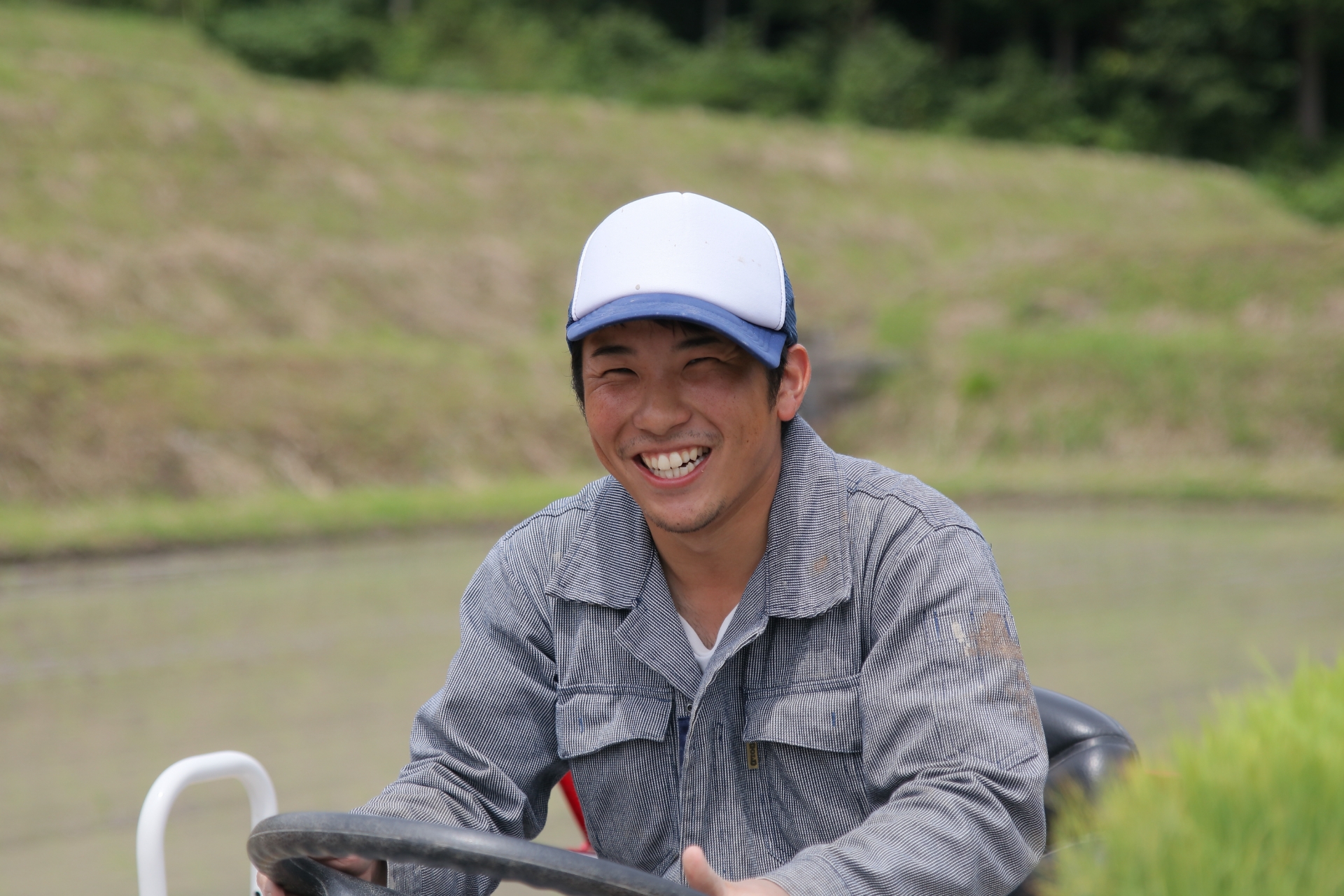 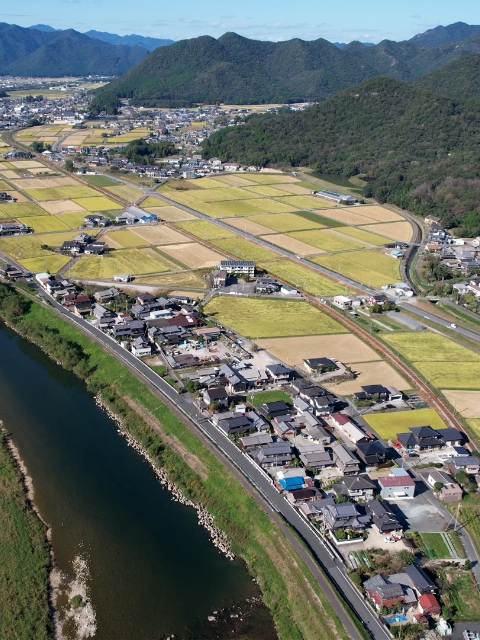 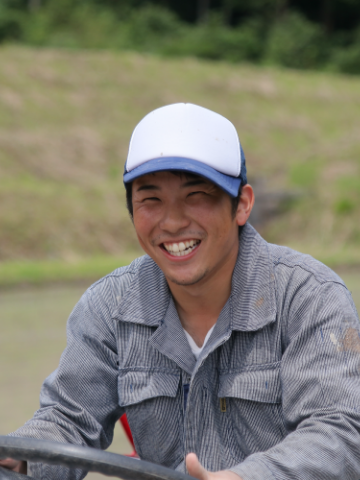 Clear color with an impressive hue of yellow green
When you put your nose near the glass, you sense fruity aroma of melon and peach, surrounded by creamy and colorful scents.
In addition to the smoky, earthy, and creamy aroma, when exposed to air, mushroom scent appears, creating a flavor-rich impression.

When you take a sip, fresh and soft acid flavors occupy your mouth, then the combination of alcohol and rice’s umami gives a pleasant impression.
Aftertastes come with smooth texture and fruity flavors, meticulously expressing the depth of the taste. 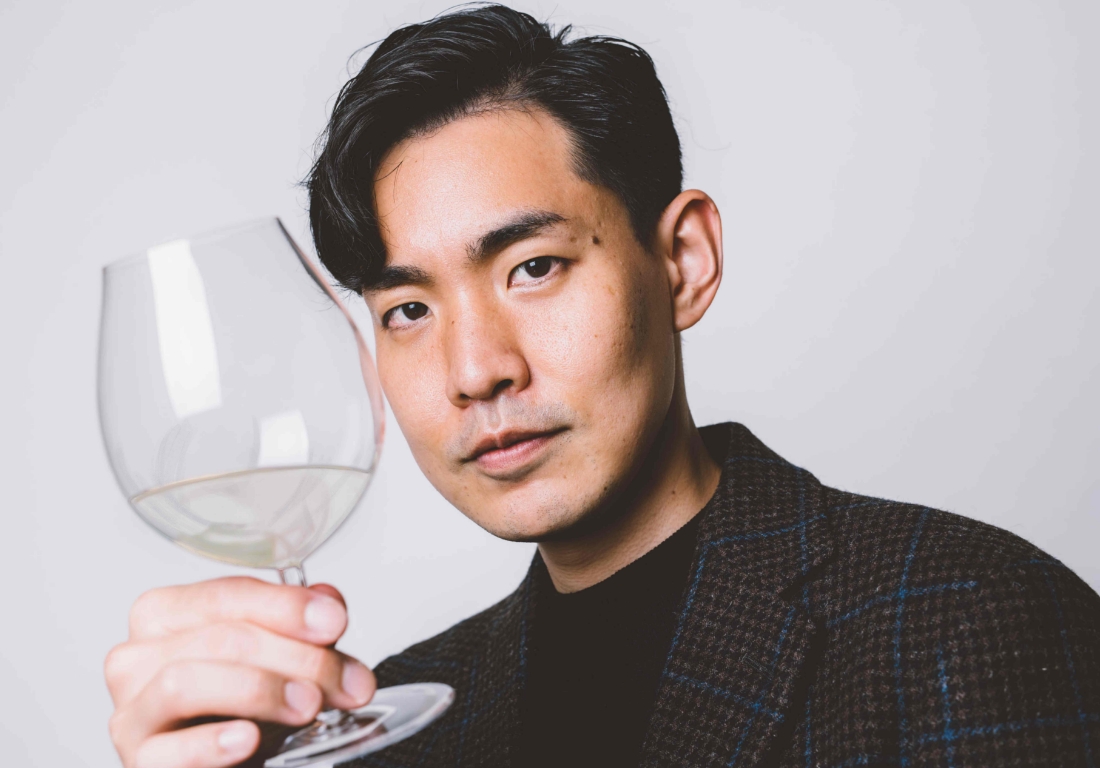 
[biography]
2012 : Started working for L'ecrin Ginza as a commis de rang, after graduating from university,
Then worked at restaurants, including Tour d'Argent Tokyo in Hotel New Otani.
2019 : Returned to L'ecrin Ginza as a sommelier.
April 2021 : Appointed as an overall beverage manager of L'ecrin Ginza Group.

“You can make them even fresher by cooking, more natural by changing the shapes. It is our awe and prayer towards ingredients to make them fresher or more natural by cooking or changing their shapes.”
(A quote from Tadayuki Takahashi, a former executive chef at Ise Shima Kanko Hotel. From his book “Bishoku no yorokobi”)
This phrase was eye-opening to me. We have the same philosophy. We replace the word “ingredients” with “Japanese sake.”
As Chef Takahashi says “even fresher by cooking,” the last step of sake-making process is called hi-ire, which is heat treatment equivalent to cooking.
“More natural by changing their shapes”: we grow our own rice which we change the shape into sake.
We want to deliver our product in the natural way, together with the yearly stories of the rice paddies.
“Awe and prayer towards ingredients”: our mission is to transform our beloved rice into sake to the fullest. I respect him a great deal.
His words “as creators of products that go into people’s mouths, we have a common goal and destination” gave me strength and courage. Thank you, Chef!
I hope you enjoy “even fresher by cooking,” and “more natural by changing their shapes,” from these sake that always begin from the rice paddies.